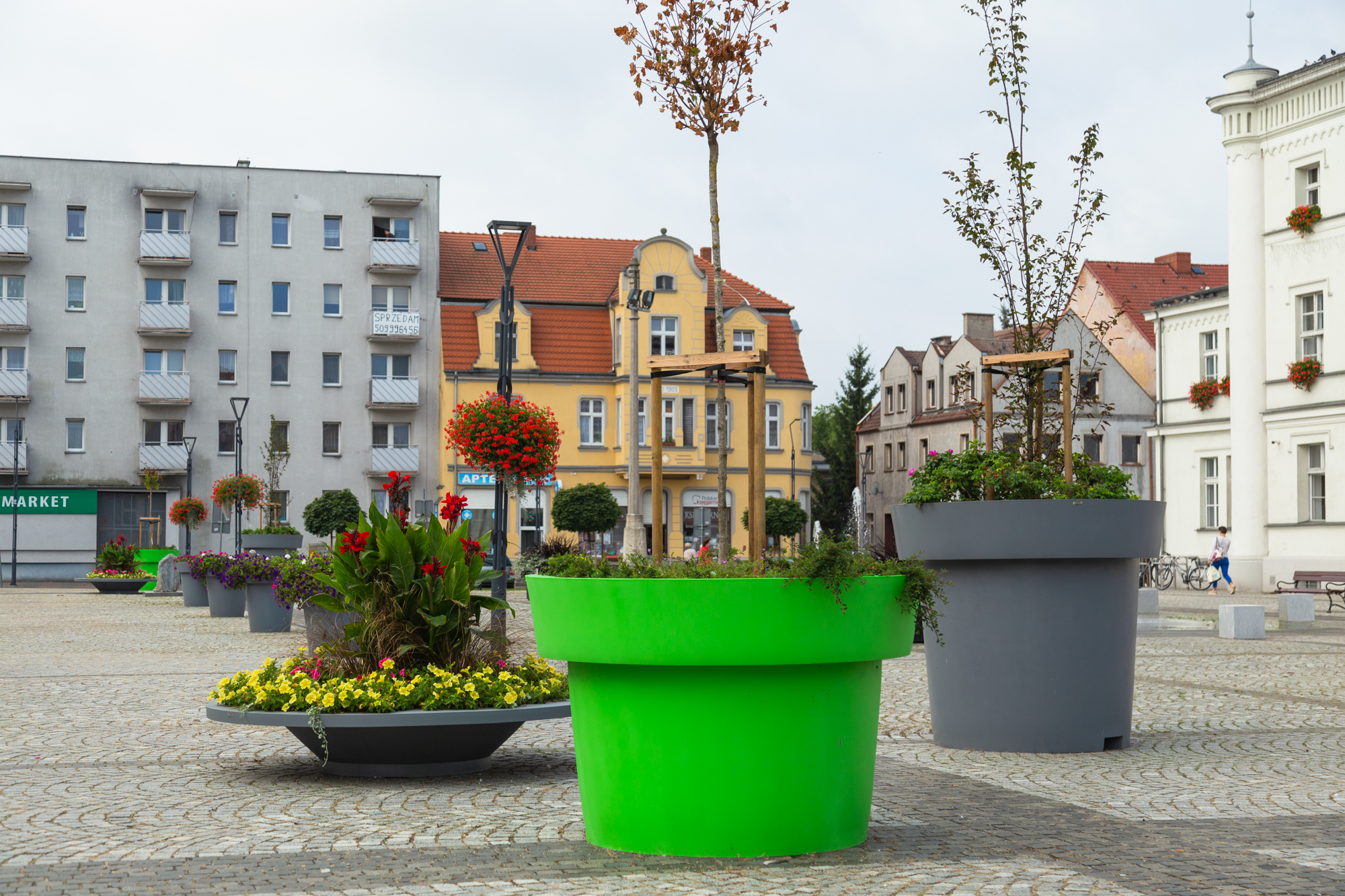 A concrete square is something that often abhors residents. In summer, the heated surface does not encourage relaxation. However, complete removal of the pavement is not always a good solution. Is there an option to turn the urban desert into an oasis that is friendly to people? In our opinion, it is possible. In this case, large urban pots will be a great help here. Thanks to them, the square can turn green without any additional construction works. How is it possible? We will present three towns in which the square has changed beyond recognition.

A town square – what is its role?

Historically, the spacious square has been a lively heart of the city. All the main roads converged there to facilitate trade. With time, when the tradition of markets lost its importance and the local people started to go to stores or shopping malls, the flat, paved area in the center changed its functionality. Now the square is a place of rest for residents and tourists on a daily basis, and during holidays it is a space for celebrations, concerts, fairs and other important events.

These two extreme roles are the cause of disputes about shaping the surroundings. On the one hand, city events require a paved, empty square, and on the other, an ideal relaxation place needs all kinds of plants, benches, fountains, and garbage bins. To create a place that perfectly performs both functions, it is best to take them both into account when creating the project. Then you can easily arrange the appropriate zones. Things get more difficult when the square is already modernized and there is a huge concrete area. In this situation, there are two possible solutions.

First of all, a complete change of the surroundings: removal of concrete pavement  and adding more plants. However, the costs of such a step are enormous and they are actually associated with the next major renovation. The second solution does not require additional heavy work. It is enough to put on large urban pots in which you can plant a variety of plants, and in the largest models even trees. To prove that it is possible, we will present three concrete squares which, thanks to mobile plantings, have found the perfect compromise between a paved surface and urban greenery.

Skwierzyna in the new edition

In 2016, the market in Skwierzyna was modernized. The neglected area disappeared and a large square appeared in its place. Thus, the most representative town space has returned to its former appearance from several dozen years ago. However, the area in front of the town hall no longer fulfills the role of the municipal merchandising space. Therefore, the town authorities faced the challenge of developing the square. After the renovation, street furniture appeared: simple in form, anthracite pots, benches, the hanging Flower Towers on lamps, and a fountain in the center. Although the water from it cooled the inhabitants down on hot days, they paid attention to the small amount of greenery.

In 2021, the town authorities decided to allocate part of the budget to bring additional plants into the square. In order not to interfere with the paving, large urban pots, which can be planted with numerous flowers and even trees, were selected. The market square in Skwierzyna was filled with gray and green containers of various forms. As a result, the plantings differed from each other depending on the size and shape of the pot.

In total, 10 new large urban pots appeared in the main square in Skwierzyna. They filled the empty space with impressive decorative plants.

A distinctive accent in Mikołajki

The Sailing Village in Mikołajki is another place on the map of Poland that has decided to modernize its area. Various materials were used for the promenade reconstruction and a modern square, which needed to be developed, was built on Kowalska Street. It is a lively place visited by hundreds of tourists every day. That is why the city authorities decided to focus on an element that will be remembered by everyone, i.e. large urban pots. Their biggest advantage, which attracts the eyes of passers-by and even encourages them to take a photo, are vivid, juicy colors – red and orange. Such colors turned out to be a bull’s-eye and they wonderfully enlivened the gray surroundings.

Decorative trees and grasses were planted in large urban pots. The classic Gianto models as well as the huge Grande and Tablo pots, which can also serve as a table, appeared not only in Skwierzyna but in Mikołajki too. It will be perfect for a snack break while walking around the marina.

The square surrounded by historic buildings is a real urban treasure. Many German cities and towns can boast of such an architectural gem, but one of them decided to stand out from the others. With what? Colorful, large urban pots! As evidenced by the large square in the very center, the Saxon Torgau has a commercial history. It turned out to be an ideal place for mobile greenery.

The vivid colors of the containers are a bold step. The success was achieved due to the balanced colors of the facades surrounding the market. Thanks to this, green, yellow, orange, blue and red pots have become a distinctive accent that does not create the effect of an urban mishmash. It turned out to be a great idea to arrange the containers in groups of 3 at numerous places on the square. Various models, colors, sizes as well as plantings create unique compositions, and the whole looks very coherent.

The case from Torgau shows that it is sometimes worth choosing less popular solutions to achieve an even better effect. Thanks to the colorful, large city planters, the square has gained its individual character and it will look fabulous on postcards or in holiday photos. If you want to see more pictures of the Saxon town, be sure to check out our Torgau post.

Large urban pots are a great solution for concrete squares. They launch plants into the most representative areas without the need for costly renovations. It is worth choosing models in which you cannot only create beautiful floral compositions, but also those that are distinguished by form, color and functionality. This way you can kill several birds with one stone. Therefore, eye-catching greenery will appear in the square, providing a place to sit or eat a meal comfortably.

Some other interesting articles: